For most of my life, I was afraid of cats.  I would have nightmares about being trapped in a room with hundreds of cats and they would all slowly move in towards me and then attack me.  I had a few friends with cats and whenever I would sleepover at their house, I could never actually sleep if I knew the cats would be around.  I was always afraid that they would scratch or bite me.

That started to change though, thanks to one of my best friend’s cats.  I used to be scared of her but after being around her for a few years, I started to get used to her.  Then gradually that turned into liking her, and now I love her.  She’s such a sweet cat.  Her name is Sheba.

Then, a few years ago when I was still living with my parents, my neighbors asked if I could take care of their cat while they went on vacation.  I would just have to go to their house, feed him and then hang out with him for awhile since he loves to be around people.  I was a little nervous to do it because he had all of his claws, whereas most of the cats I’d been around previously were front declawed.  But I agreed to do it for the money, and he was a cute cat.  Since then, I have cat-sitted for them at least 4 times and came to love that cat as well.

Then my husband grew up with cats and he really wanted to get a cat.  When we lived in our apartment it wasn’t possible but once we bought our house we decided to get a cat a month after we moved in.  The nearest shelter is the next town south of our town.  We spent quite a bit of time looking on their website, trying to find a kitty around the age we wanted.  Finally we found one we both liked and went down straight after work to see her.  She was a grey and white tabby cat, 6 months old.  She was a stray someone had brought in, no brothers or sisters.  Her name at the shelter was Edda.  We didn’t really like that name so once we officially decided we wanted to get her, we decided to name her Nika.  The people at the shelter told us that she would be a very petite cat, getting to be no more than 7 lbs.  Here are a couple of pictures of her the day we got her.

She was such a cute little kitten.  Now she is about a year and a half old.  We love her to death.  And she has hit her maximum weight haha.  She is as big as she is going to get.

Then we decided that she needed a playmate since we’re gone all day at work.  So 3 months later we decided to check the shelter again to find a suitable playmate around her age.  Our best option we found was a cute little gray kitten who was almost 4 months old.  His name was Enzo.  We went to the shelter and got to play with him for a little in a room.  He was so cute and playful!  He had razor sharp claws though haha.  He was also a stray without any brothers or sisters. 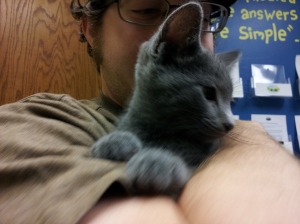 Enzo the day we brought him home

So we decided to get him.  We brought him home and left him in the cat carrier to be introduced to Nika.  That was some of the funniest stuff ever.  They did not get along too well for a couple of months.  So we kept Enzo in his own room.  We tried putting a baby gate up so that they could still get used to each other but it took no effort for Enzo to leap over the top.  So we got another one and put it on top but he still managed to jump all the way up. Here is a picture of the two of them playing between the baby gate.

Now they are snuggle buddies.  They still love playing and play fighting but when it’s time for a nap, they’ll cuddle up together. 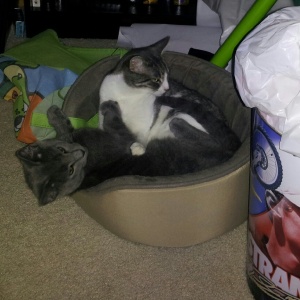 Snuggled up in the same bed

Enzo just turned a year old at the beginning of the month.

I love my kitties and couldn’t imagine my life without them now.  Even when they drive me nuts and test my patience.  Enzo is notorious for getting into food if you leave it out and jumping on counters.

We had just purchased that loaf of bread and were in the process of putting groceries away.  That is how fast he works haha.  But there is nothing like them coming up to you and snuggling up to take a nap.  Nika is snuggled up next to me sleeping away as I type this post.  I may sound like a crazy cat lady but I can’t help it.  They’re just so damn cute!

Here are some of my favorite photos of them. 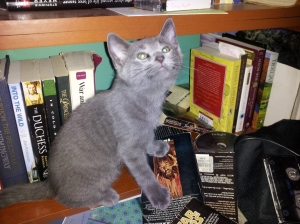 He loves jumping behind books on shelves 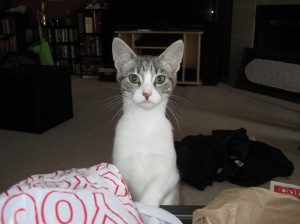 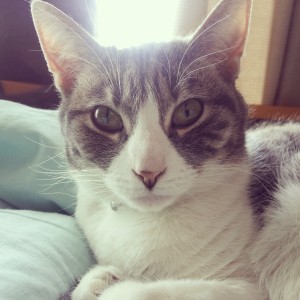